Interesting article, and quite in-depth, given the fact that it was written by a foreigner. Reading it makes me feel curious, and want to visit Phu Quoc someday, to learn more about my country and experience the craftsmanship myself. It will be an exciting journey, I believe 🙂

Old fishermen once downed a cupful to keep warm when venturing out to sea. Divers drank it before plunging into deep, cold waters. Many believe the best kind comes from only one island, where it is aged in decades-old barrels of a particular type of wood. Who knew fermented fish could be so romantic? Like wine in France and olive oil in Italy, fish sauce is the prized staple of Vietnam, where it is used in soups and marinades or diluted into a sauce that accompanies foods from spring rolls to noodles. The Vietnamese have seals on their bottles to indicate quality, the highest being nuoc mam nhi, the first extraction of liquid from fish fermented in salt: extra-virgin fish sauce, if you will. And  the best of the best, as widely agreed among Vietnamese enclaves around the world, comes from Phu Quoc, a tropical island off the nation’s southwest coast. In fact, the Phu Quoc name is so coveted and abused in the fish sauce industry that local producers have been working with the World Trade Organization to protect its appellation of origin. Curious as to what made Phu Quoc fish sauce so legendary, I made my way to the fabled island this winter to taste it for myself. 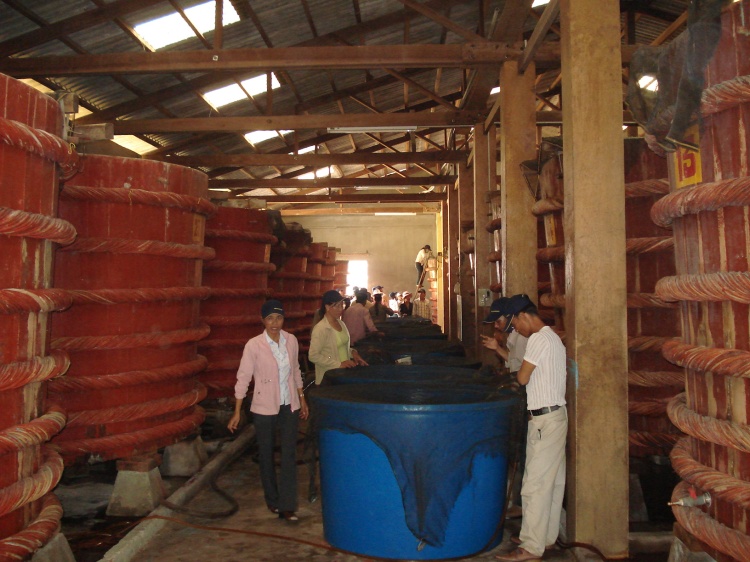 Frankly, there isn’t much romantic about the Khai Hoan fish sauce factory I visited there. About 10 feet from the factory entrance, the acrid odor hit me: a dense, stifling smell, almost like rank sweat. Forging onward, I made my way into a tall room with floating rafters, underneath which stood row after row of hulking wooden vats, each with a spigot on the bottom to drain the juices. The giant barrels were filled with the amber-colored liquid, some with a crusty orange film that had settled on top. At  the factory storefront, a worker handed me a bowl of fish sauce and a straw and motioned for me to sip. A few drops filled my mouth with a pungent, robust meatiness. The flavor was rich and complex, like pure essence of cured meat compacted and liquefied. Making the sauce requires three parts fish to one part salt, a ratio common to most producers in Southeast Asia. Anchovies or other tiny fish usually are used; larger, more expensive fish such as mackerel or sardines can be substituted but result in a costlier, less profitable product. After about a week, liquid begins seeping from the fish and is drained and circulated back into the vat every day for an entire year — long enough for it to reach concentration, but not long enough for hydrosulfuric acid to appear, which would spoil the taste.

This first extraction is the highest quality, reserved for direct consumption in dips and sauces. Subsequent extractions are produced by running sea water through the vat, which results in a weaker, lower-grade product normally used for cooking. It’s a process that hails from ancient times and is not confined just to Asia. The Romans used a similarly fermented fish liquid they called garum, which appears in nearly 350 recipes in Apicius’s classical Roman cookbook, “De Re Coquinaria.” Pompeii later became famous for its production of the condiment, and even now, a fish sauce called colatura remains a specialty of Cetara, a village on the Amalfi Coast of Italy, where locals toss it with pasta and garlic. In the East, fish sauce is likely to have come from China or Vietnam as a way of preserving fish. Some speculate that the Chinese often mixed in soy beans as filler, and because more of the population in China lived away from the coast, soy beans became more common than fish, eventually leading to the soy sauce now associated with Chinese cuisine. At the factory in Phu Quoc, the workers lined up the bottles of fish sauce by gradients of color, like tea steeped to varying degrees. The darkest-colored bottle was labeled “43°N/1L” and came from the first extraction of liquid. The others bore decreasingly lower numbers — 40, 30, 20 and 15°N/L — and came from subsequent extractions, after water had been added. 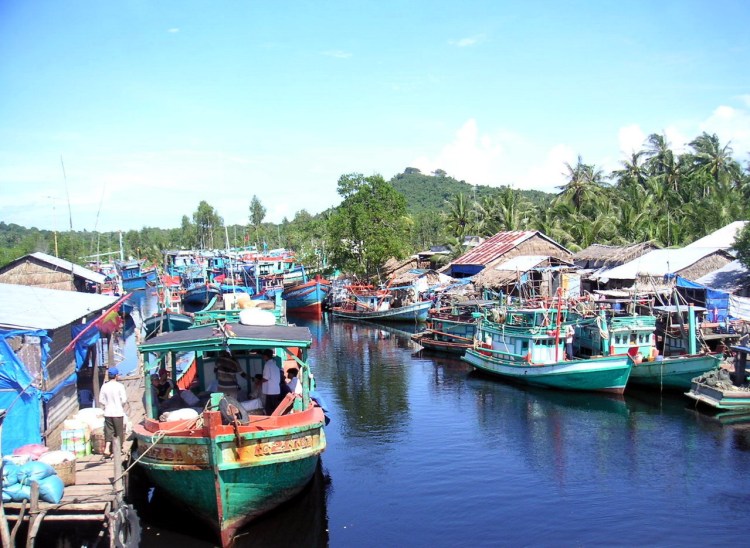 It took some digging to find someone who could explain those numbers and the science behind them. But after several phone calls, a bit of networking and a flight back to Ho Chi Minh City, I found myself walking into a squat, concrete Soviet-era-style government building, where, in a classroom full of cramped desks and chairs, I finally met my fish sauce guru. “Good nuoc mam should be transparent. You should be able to see the other side of the bottle,” said Nguyen Quoc-Thiet, a researcher at the Vietnam Academy of Science and Technology who gave me a personal, hour-long lecture with the intensity and expertise of a sommelier. “It tastes salty at first, but the aftertaste is sweet,” he said. Nguyen comes from An Thoi, a cluster of islands on the southern tip of Phu Quoc, where his family has worked in the fish sauce industry for three generations. His grandfather began working at a friend’s factory in the ’40s, and every time he saved enough money, he bought one of the large wooden vats, hoping to some day start his own business.

The vats back then were made from a tree indigenous to Phu Quoc and were believed to impart a special flavor to the liquid, “like oak to wine,” Nguyen explained. Known as boi loi, the tree is found only on Chua, or “God,” Mountain in the Phu Quoc National Park and has become endangered and illegal to cut down. By the time Nguyen’s grandfather died, he had 100 such tanks that he bequeathed to his 10 children.

Pursuing that family legacy, Nguyen wrote his undergraduate thesis on fish sauce and went on to receive his PhD in organic chemistry. When asked about the figures measured in °N/1L on the bottles at the factory, he launched into a dense 15-minute lecture that included hand-scrawled flowcharts and molecular formulas. What the number boils down to, Nguyen explained, is the degrees of nitrogen content per liter, a figure that denotes the concentration of fish protein in each drop. While protein is solid, the process of fermentation breaks down the protein’s amino acid bonds, of which nitrogen is a main component. “Some people say we are cheating, because they can’t do it,” he said. “Maybe because it is so hot there, over 32 degrees Celsius.” Nguyen says the unique taste of Phu Quoc fish sauce comes from a combination of weather, temperature and fish. Phu Quoc producers use only a particular variety of fish called ca com (literally, “rice fish”), or the long-jawed anchovy, from the island’s surrounding waters.

The high protein content in Phu Quoc fish sauce also gives it a strong taste of umami — that much-talked-about, elusive fifth flavor insufficiently described as savoriness or earthiness. Fish sauce is thus a great flavor-enhancer, increasingly used by American chefs, who have even begun incorporating it into non-Asian dishes to add flavor when something seems to be lacking. Others use it as an easy replacement for anchovy in dishes such as Caesar salad or pasta sauces. Dean Gold, owner of the Italian restaurant Dino in Cleveland Park, said, “I use it commonly when I’m cooking sauces that have winter or canned tomatoes to give it that extra boost of flavor.” Though fish sauce isn’t widely used in Italian food, Gold says it’s sneaking in as part of the nuova cucina movement, with chefs putting a modern spin on traditional dishes. But as the global appetite for fish sauce grows, satisfying it is proving to be no easy feat. “There’s no future for nuoc mam,” Nguyen told me in Vietnam. Despite being the eldest of five siblings, Nguyen recently left the family business to become a government researcher.

With no regulations on fishing season in Vietnam, overfishing is rampant. The shortage of boi loi wood for vats forces factories to use other trees or even concrete. Larger corporations are also muscling out Phu Quoc families. Nguyen’s family factory, for example, doesn’t have a famous brand, so it sells its product to larger companies that take most of the profit. Such difficulties have led Phu Quoc’s fish sauce production to drop from 13 million to 15 million liters in 2008 to only about 8 million liters in the first 10 months of 2009. Based on those numbers, the island’s producers point out that as much as 90 percent of the fish sauce claiming to be from Phu Quoc is probably coming from somewhere else.

Phu Quoc fish sauce is also more difficult to export than other brands, as it tends to oxidize and change flavor quickly. Vietnam Airlines won’t let it on board due to its strong odor. And because of the 19-year U.S. trade embargo imposed on Vietnam since the communist takeover in 1975, most of the fish sauce on the American market these days comes from Thailand. The Phu Quoc Fish Sauce Association has voiced the need to preserve traditional methods of making its product, in addition to protecting its name. “Maybe some of us will continue my father’s business,” Nguyen said, “but not me. I have to stay here for research. They don’t need a PhD in Phu Quoc.” But given the complexity of the problem and the growing global demand, maybe they do.